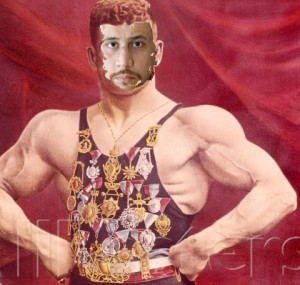 Media circus strongman George Zimmerman, who in 2012 shot and killed black teen Trayvon Martin in alleged “self defense, was arrested last night for pointing a shotgun at his current girlfriend in — yep — “self defense.”

From The Orlando Sentinel:

She told Seminole County deputies that she had ordered him to move out and he had begun to pack when he got a shotgun, cocked it, pointed it at her and broke a glass-topped table, according to his arrest report.

He then shoved her outside and locked and barricaded the door, according to Sheriff’s Office Chief Deputy Dennis Lemma.

While deputies were outside, banging on the door, trying to get him to come out, Zimmerman called 911 and blamed the dispute on his girlfriend, whom he said had “gone crazy on me.”

This is the third “domestic incident” reported in the news since Zimmerman was absolved of guilt by an all-white jury in an incident in Feb. 2012 when Zimmerman shot and killed black teen Trayvon Martin in alleged self-defense. Wikipedia has an overview of that media circus here.

← Not all rings in the circus are equal